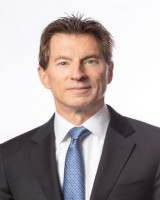 Jim has tried over 100 cases to verdict and divides his practice between the areas of commercial litigation and plaintiff’s personal injury. He has achieved multiple million dollar verdicts and settlements in both State and Federal Court and has appeared and argued multiple times before the United States Second Circuit Court of Appeals and the New York State Court of Appeals.

In addition to Jim’s extensive legal representation, he serves as a Trustee on the Board of Hamilton College and is a member of the Board of Trustees of Albany Law School where he was a former Board Chair.

He has been recognized by the most prestigious trial lawyer associations. Jim is an elected Fellow of the American College of Trial Lawyers, one of the premier legal associations in North America. The College is comprised of the best of the trial bar from the United States and Canada and membership is by invitation only. He is also an elected Fellow of the International College of Trial Lawyers whose membership is limited to 500 US trial lawyers and membership is by invitation only.

He currently serves as a Regional Vice President of the New York State Trial Lawyers Academy and on the Board of Directors for the Legal Aid Society for Northeastern New York.

Mr. Hacker holds an AV rating from Martindale Hubbell and has been recognized as a “Best Lawyer in America” and “Super Lawyer” in both the fields of personal injury and commercial litigation. He has previously been recognized as “Lawyer of the Year” in both categories.

He is also an elected member of the National Academy of Distinguished Neutrals and has been appointed as a United States District Court Mediator. He has mediated and arbitrated over 750 cases in the last 15 years. He has also served as an expert witness in various jurisdictions.

E. Stewart Jones Hacker Murphy is a New York Law Firm of Distinction and Excellence. Law firms come and go. Few have the integrity, work ethic and commitment to service required to berecognized for excellence dating back more than 115+ years.

E. Stewart Jones Hacker Murphy is one of the most prestigious, trusted law firms in the Albany, Capital District Region, representing clients in Town, City and County Courts of New York State and Federal Courts in the Eastern District of Upstate New York – spanning from Albany to Plattsburgh.

The firm’s Criminal Defense practice has represented all levels of cases and clients over the years, from the very basic charges to high-profile clients. One thing has always been consistent; the lawyers of E. Stewart Jones Hacker Murphy serve people from every walk of life with the same level of professionalism and desire to win. From local charges of DWI and DWAI, assault, petit larceny, grand larceny, burglary and domestic violence to white-collar crime, identity theft, and Federal crimes of wire fraud, identity theft, or drug charges, you can expect to be treated with compassion and respect. We take great pride in representing each client with integrity and exceptional professionalism.