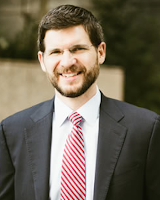 James Cobb is a trial and appellate lawyer and a founding partner of Caplan Cobb LLP.  James specializes in complex business disputes, federal and state appeals, class actions, and constitutional and tort litigation.

James’s cases have been the subject of news articles all over the country, including in the Atlanta Journal-Constitution, the New York Times, and the Washington Post. James is listed in The Best Lawyers in America for commercial litigation. In addition, American Law Media’s Daily Report named James to its list of the 40 lawyers in Georgia who are “On the Rise”; Martindale-Hubbell gave him its highest rating of AV Preeminent; Georgia Trend magazine named him to its list of Georgia’s Legal Elite; and Super Lawyers magazine named him a Super Lawyer in business litigation.

Before founding Caplan Cobb, James served as a law clerk to the Honorable Jacques L. Wiener, Jr., of the U.S. Court of Appeals for the Fifth Circuit in New Orleans. He also practiced with Rogers & Hardin LLP in Atlanta and Ropes & Gray LLP in Boston.

James has a diverse and wide-ranging appellate practice that covers civil and criminal appeals in both state and federal courts. James’s written and oral advocacy has been praised as “excellent,” “outstanding,” of “the highest quality,” and “masterful.” After a recent oral argument before the Supreme Court of Georgia, one lawyer described James’s argument as “quite possibly the finest example of appellate advocacy I’ve heard; it was on par with the best [Supreme Court of the United States] appellate advocate.”

Listed in The Best Lawyers in America for Commercial Litigation

Order of the Coif

Caplan Cobb specializes in federal and state appellate practice. Working side by side with trial counsel, we have argued and won appeals in significant and precedent-setting civil and criminal cases.

Caplan Cobb’s appellate practice is founded on the highest standards of written and oral advocacy. Our work has been praised as “outstanding,” “deft,” “articulate,” “masterful,” and “of the highest quality.”

We trained under some of the most highly regarded appellate lawyers in the country and clerked for federal trial and appellate judges. Those experiences are tremendously valuable to crafting a successful appeal: determining which issues to appeal, isolating the most persuasive arguments, drafting a powerful brief, and thoroughly preparing for oral argument. We bring unique experience and independent perspective to every appeal.