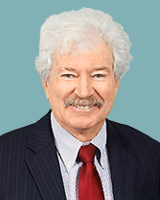 Terrance J. Hamilton specializes in professional and legal malpractice litigation, personal injury matters, and construction and surety law cases. He has extensive trial court experience in the state and federal courts and substantial appellate experience (over 40 reported decisions) before the Massachusetts Supreme Judicial Court, the Massachusetts Appeals Court, and the United States Court of Appeals for the First Circuit.

Terry has served as a faculty member with Massachusetts Continuing Legal Education,  the Massachusetts Bar Association, Massachusetts Defense Lawyers Association and the Annual Meeting of Invited Attorneys. He is published in Cushman, Handling Fidelity, Surety, and Financial Risk Claims (Wiley & Sons, Inc., 1990) and, for several years, in the Annual Survey of Massachusetts Law.

Over the past 40 years, the attorneys of Casner & Edwards have built lasting client relationships through sound counsel and personal attention to individuals, businesses and institutions.

Throughout these years of distinguished service, we’ve kept pace with the remarkable changes in business and the law, including by consistently attracting attorneys who are recognized leaders in their fields. Keeping current enables us to effectively address the increasingly complex demands that our clients face.

Contemporary knowledge and a dedication to personal attention and accessibility are key to establishing and maintaining strong relationships.

We strive to live up to these principles every day, and consider it important measures of our success that many of our clients have been with us for decades, and that both our clients and our peers consider us to be a dependable ally and a reliable advocate.