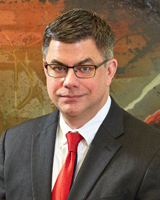 Mr. Ella has been named as a Minnesota “Super Lawyer” in the area of appellate law.  He is a member of the Appellate Law Section of the Minnesota State Bar Association and the Association of the Bar of the United States Court of Appeals for the Eighth Circuit. Mr. Ella clerked for judges in both state court and federal court.

Mr. Ella practices in all aspects of commercial litigation, employment law, and business law, with an emphasis on unfair competition and defending employment claims. Mr. Ella is the author of Executive Employment Law – A Handbook for Minnesota Executives published in 2018 by Mill City Press as well as over one hundred articles or book chapters for various legal publications. He frequently lectures on the topic of workplace privacy and employee monitoring. He also speaks on common law fraud and was co-author of the Summary Guide to Fraud, Misrepresentation and Deceptive Trade Practices. Mr. Ella also taught legal writing at the University of Minnesota Law School.

Mr. Ella was a Law Clerk for Judge Carol B. Amon, Eastern District of New York from 1996-1997 and for Judge William E. Kalar, Ninth Judicial District of Minnesota from 1994-1995. After ten years as an attorney at a local general practice firm he spent almost ten years at the nation’s second-largest labor and employment defense firm as a partner where he represented many Fortune 500 and large global corporations in all aspects of employment law. He joined Trepanier MacGillis Battina in 2016.